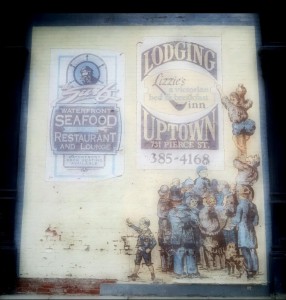 The Jefferson County Historical Society tells the story of our town, describing Port Townsend as a remote outpost and village that grew into a a bustling seaport with a population of over 7,000 people, a city of dreams. Teeming with life along the water front, during the height of maritime commerce in the mid to late 1800’s, every kind of business and entrepreneurial enterprise sprang up to accomodate the influx of sailors, workers, and folks settling in to make a life and a living on the Olympic Peninsula. After the turn of the century, Port Townsend lost it’s advantage of the position it held as a gem of prosperity and opportunity on the Puget Sound – an ideal location for maritime commerce. The economy began to plummet partly due to the advent of steam-powered ships, which were by then routing their cargo to the customs office that was relocated to Seattle in 1911, along with the loss of the anticipated railroad. The population plummeted to 3,300 by 1910.

Today, we can still enjoy many of the landmarks, architecture, and other historic features and structures that have stood the test of time, many renovated at one time or another over the years. Both downtown and Uptown areas of Port Townsend are once again thriving business communities that have grown along with the growing population of over 9,000 people. Some of the mural graphics, both old and new, which cover some of the exteriors of brick buildings, one, even two stories high, such as the one pictured here, are preserved and appreciated for the unique, Victorian images they conjure up and the visual stories they tell of then and now.

A visit to the Historical Society, as well as self-guided walking tours of the town and marinas are how I first acquainted myself with Port Townsend’s rich history. The historic building plaque project is also a good place to start acquainting oneself with Port Townsend’s past and present. Today, Port Townsend is well known as a Victorian Seaport and hosts an annual Victorian Festival in March. It was after learning something of Port Townsend’s colorful maritime history and meeting local shanty enthusiasts that I became one myself, hosting a family-friendly shanty sing monthly since January of 2012. Out of that gathering, a group of us formed to work on a songbook project to preserve and enjoy maritime music. Sing Shanties & Songs About the Sea was published last August. Port Townsend is still referred to as the City of Dreams, and rightly so.