Garry Winogrand‘s perfectly timed photo reminds me of the day I was photographing on the street and captured an unusual moment similar to his. See my image below Winogrand’s. 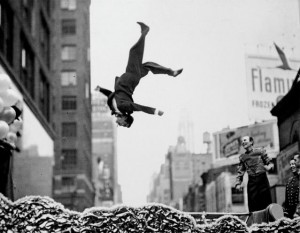 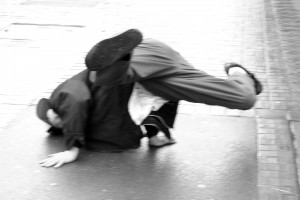 Some of the” first impression” feedback I’ve received on my image above is that I caught this guy just as he fell, crashing to the ground, as in he’s fallen from a building. I admit it does look like that at first glance. In reality he was heading my direction with his companions, suddenly stopping on the sidewalk right in front of me, where I was standing in an alcove, and started breakdancing – one reason the image lacks clarity – the element of surprise! Rather than delete the image because it wasn’t sharp, I focused on the authenticity of moment. It is one of my favorite street photography images.

“I love the people I photograph. I mean, they’re my friends. I’ve never met most of them or I don’t know them at all, yet through my images I live with them.” – Bruce Gilden

After he unwound his tangled limbs and hopped up off the pavement, I got to know something about him, not as a subject but as a person. His name is Wanderer. He has a son by the name of Madison. He and his friends travel by box car around the country hopping off at towns along the way to leave their mark on the world – graffiti. I instantly liked him and his gang, who at first looked intimidating, but in reality turned out to be really sweet guys who shared a common passion. They were in no hurry to rush off, but hung around with me for a while talking with me about themselves as though we were friends reconnecting after a long absence and catching up. I suppose that to them, I was one of many people across the country that create a sense of community for  them wherever they go… one moment at a time, connected by thousands of miles of track. 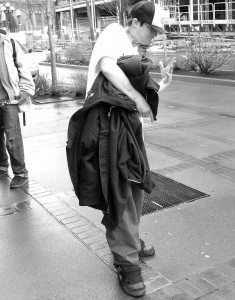 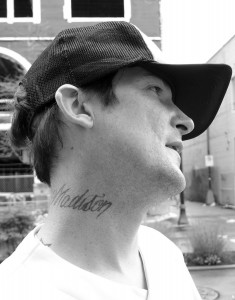