“After spending an adventurous day all over Whidbey Island and the surrounding areas, that evening we came across a restaurant ‘Flyers Restaurant and Brewery’, which looked appealing to both Coulter and I to stop at and fuel up our bellies. 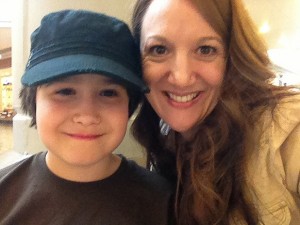 Part way though our meal, I see Coulter’s eyes continue to focus on something behind me.  So finally I asked him what he was looking at.  Coulter told me to turn around and see that “famous guy” with the hat on.  Trying not to be too obvious, I slowly turn and the only person I see wearing a hat is an elderly gentleman; he is clearly a Veteran with a WWII baseball cap as well as a jacket that represents the same.  Turning back to Coulter, I asked him if the “famous” person he was referring to is the elderly man with the WWII cap.  Coulter confirms this and goes on to ask me if it was okay if he talked to him and ask for his autograph.  I told Coulter that OF COURSE he could talk with this man, shake his hand, etc.

After our meal we slowly made our way to his table, apologized for interrupting his meal but making clear that we just wanted to thank him for his service.  This gentleman stood up, his voice barely audible, and thanked Coulter and I for taking the time to greet him. He not only told us but showed us what he wore proudly… his WWII Medal of Honor that he received for his duty and action in France.  He went on to look directly at Coulter, take his hand, and thank him deeply for being brave and coming over to talk with him. He also went on to tell Coulter that he could come and talk with him anytime, and that  it was HIS honor to meet Coulter!!

Of course, I was moved by this entire exchange of conversation but felt that something much deeper was being said between this gentleman and my son, something that will stay with and in Coulter for a very long time to come.

As we were both walking away slowly there was no conversation between Coulter and I, just feelings, then Coulter spoke what was already on my mind, “Mom, can we pay his food?”  All I could softly say was, “Of course we can.”   My eyes and heart were equally overflowing with amazement of who my son REALLY is!  I am so in love with this young man and so honored to be his mother!

As we made our way over to our waitress, giving her cash in abundance of what I felt his meal would cost, her eyes now filled with tears as she told us that she and couple of other servers watched Coulter and this elderly gentleman talk together.  She went on to say that they were all moved by the conversation, which they watched from afar, and told us that a lot of people nod to the frail gentleman that visits the restaurant periodically, or they just look, but that very few actually approach him or take the time to talk with him.

Not only can we can learn so much from our elders and Veterans but also the pure innocence of children.   I am so proud of Coulter –  his heart, his bravery, his innocence!!  So many today are wrapped up in what “famous” looks like, but Coulter recognized “famous” for what it REALLY is!”